This video was shot during a dive in the Nosy Be coral reef in Madagascar. These sponges are typical of the seabed of Madagascar and of the eastern African areas such as Mozambique and Tanzania. These sponges that live in small colonies can reach 60 cm. in height. I poriferi o spugne sono animali

Sponges, the members of the phylum Porifera are a basal Metazoa (animal) clade as a sister of the Diploblats. They are multicellular organisms that have bodies full of pores and channels allowing water to circulate through them, consisting of jelly-like mesohyl sandwiched between two thin layers of cells. The branch of zoology that studies sponges is known as spongiology. Sponges have unspecialized cells that can transform into other types and that often migrate between the main cell layers and the mesohyl in the process. Sponges do not have nervous, digestive or circulatory sistems. Instead, most rely on maintaining a constant water flow through their bodies to obtain food and oxygen and to remove wastes. Sponges were first to branch off the evolutionary tree from the common ancestor of all animals, making them the sister group of all other animals. I poriferi o spugne sono animali

Sponges are similar to other animals in that they are multicellular, heterotrophic, lack cell walls and produce sperm cells. Unlike other animals, they lack true tissues and organs. Some of them are radially symmetrical, but most are asymmetrical. The shapes of their bodies are adapted for maximal efficiency of water flow through the central cavity, where the water deposits nutrients and then leaves through a hole called the osculum. Many sponges have internal skeletons of spongin and/or spicules (skeletal-like fragments) of calcium carbonate or silicon dioxide. All sponges are sessile aquatic animals, meaning that they attach to an underwater surface and remain fixed in place (i.e., do not travel). Although there are freshwater species, the great majority are marine (salt-water) species, ranging in habitat from tidal zones to depths exceeding 8,800 m. I poriferi o spugne sono animali

Although most of the approximately 5,000–10,000 known species of sponges feed on bacteria  and other microscopic food in the water, some host photosynthesizing  microorganisms as endosymbionts, and these alliances often produce more food and oxygen than they consume. A few species of sponges that live in food-poor environments have evolved as carnivores that prey mainly on small crustaceans.

Most species use sexual reproduction, releasing sperm cells into the water to fertilize ova that in some species are released and in others are retained by the “mother.” The fertilized eggs develop into larvae, which swim off in search of places to settle. Sponges are known for regenerating from fragments that are broken off, although this only works if the fragments include the right types of cells. A few species reproduce by budding. When environmental conditions become less hospitable to the sponges, for example as temperatures drop, many freshwater species and a few marine ones produce gemmules, “survival pods” of unspecialized cells that remain dormant until conditions improve; they then either form completely new sponges or recolonize the skeletons of their parents. 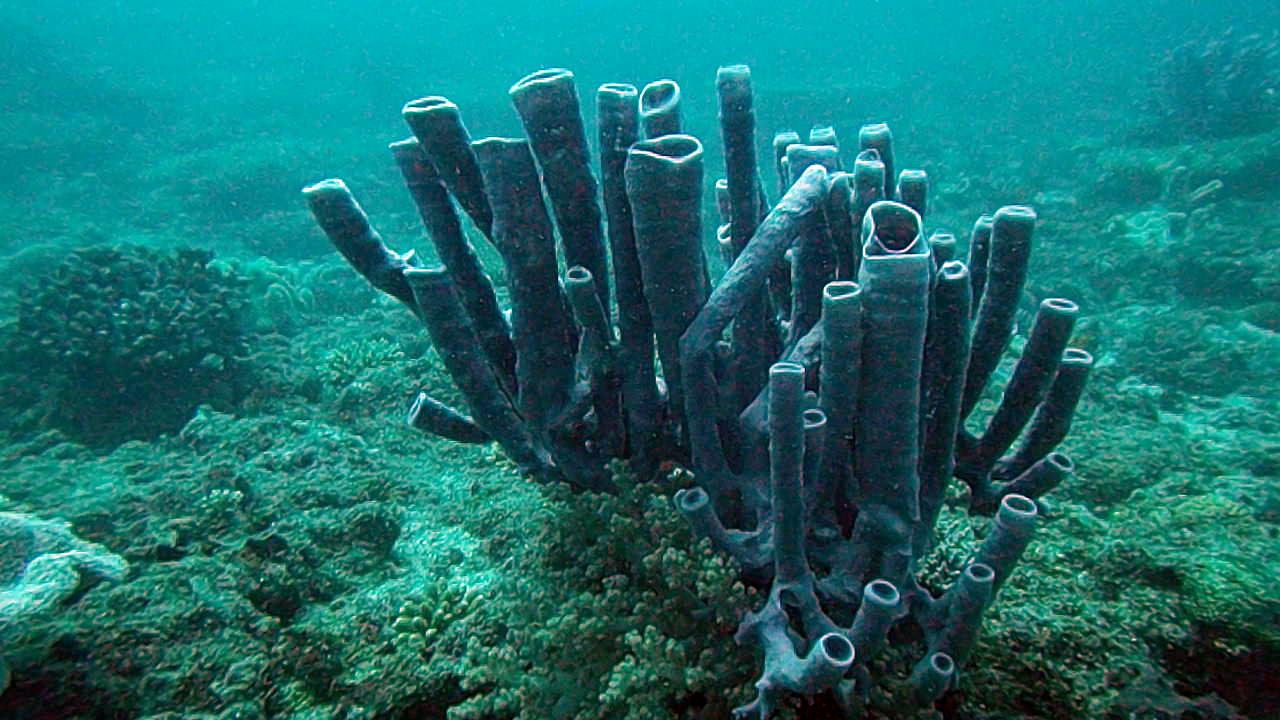 In most sponges, an internal gelatinous matrix called mesohyl functions as an edoskeleton, and it is the only skeleton in soft sponges that encrust such hard surfaces as rocks. More commonly, the mesohyl is stiffened by mineral spicules, by spongin fibers, or both. Demosponges use spongin; many species have silica spicules, whereas some species have calcium carbonate exoskeletons. Demosponges constitute about 90% of all known sponge species, including all freshwater ones, and they have the widest range of habitats. Calcareus sponges, which have calcium carbonate spicules and, in some species, calcium carbonate exoskeletons, are restricted to relatively shallow marine waters where production of calcium carbonate is easiest. The fragile glass sponges, with “scaffolding” of silica spicules, are restricted to polar regions and the ocean depths where predators are rare. Fossils of all of these types have been found in rocks dated from 580cmillion years ago. In addition Archaeocyathids, whose fossils are common in rocks from 530 to 490 milion years ago, are now regarded as a type of sponge.

The few species of demosponge that have entirely soft fibrous skeletons with no hard elements have been used by humans over thousands of years for several purposes, including as padding and as cleaning tools. By the 1950s, though, these had been overfished so heavily that the industry almost collapsed, and most sponge-like materials are now synthetic. Sponges and their microscopic endosymbionts are now being researched as possible sources of medicines for treating a wide range of diseases.

Sponges do not have distinct circulatory, respiratory, digestive and excretory systems – instead the water flow system supports all these functions. They filter food particles out of the water flowing through them. Particles larger than 50 micrometers cannot enter the ostia and pinacocytes consume them by phagocytosis (engulfing and internal digestion). Particles from 0.5 μm to 50 μm are trapped in the ostia, which taper from the outer to inner ends. These particles are consumed by pinacocytes or by archaeocytes which partially extrude themselves through the walls of the ostia. Bacteria-sized particles, below 0.5 micrometers, pass through the ostia and are caught and consumed by choanocytes. Since the smallest particles are by far the most common, choanocytes typically capture 80% of a sponge’s food supply. Archaeocytes transport food packaged in vesicles from cells that directly digest food to those that do not. At least one species of sponge has internal fibers that function as tracks for use by nutrient-carrying archaeocytes, and these tracks also move inert objects.

Sponges’ cells absorb oxygen by diffusion from water into cells as water flows through body, into which carbon dioxide and other soluble waste products such as ammonia also diffuse. Archeocytes remove mineral particles that threaten to block the ostia, transport them through the mesohyl and generally dump them into the outgoing water current, although some species incorporate them into their skeletons.

Sponges are worldwide in their distribution, living in a wide range of ocean habitats, from the polar regions to the tropics. Most live in quiet, clear waters, because sediment stirred up by waves or currents would block their pores, making it difficult for them to feed and breathe. The greatest numbers of sponges are usually found on firm surfaces such as rocks, but some sponges can attach themselves to soft sediment by means of a root-like base. Sponges are more abundant but less diverse in temperate waters than in tropical waters, possibly because organisms that prey on sponges are more abundant in tropical waters. Glass sponges are the most common in polar waters and in the depths of temperate and tropical seas, as their very porous construction enables them to extract food from these resource-poor waters with the minimum of effort. Demosponges and calcareous sponges are abundant and diverse in shallower non-polar waters. We are in a stretch of sea between Livorno and the island of Gorgona, off…